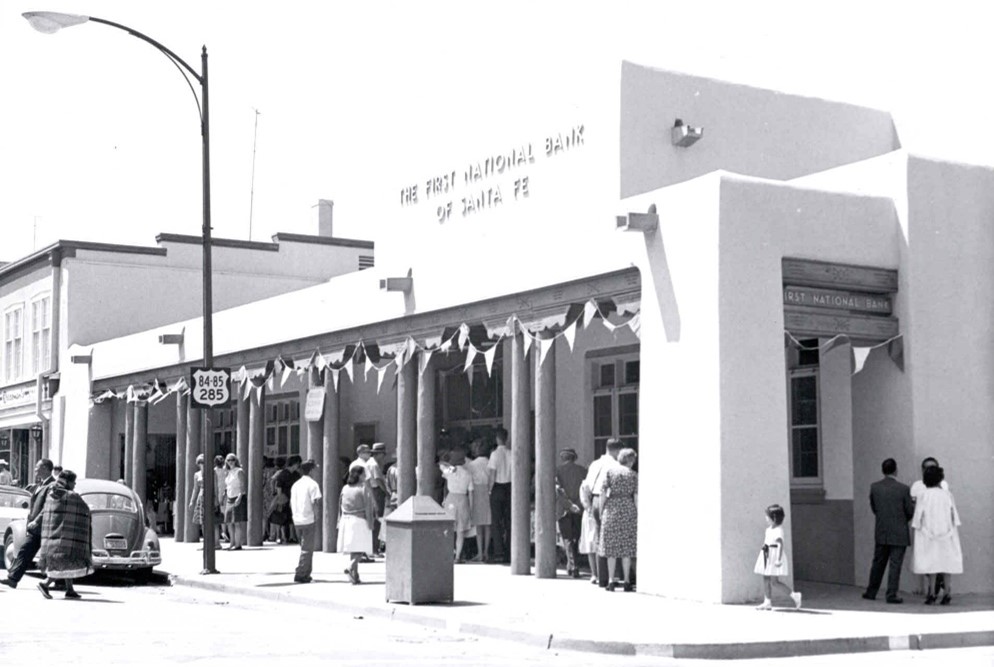 In 1926, Mary Austin and the Spanish Colonial Arts Society organized the first Spanish Market to promote the local Hispanic traditional arts. It was held during the Santa Fe Fiestas in the patio of the Fine Arts Museum on West Palace Avenue.  A prize competition was funded by Mrs. Hooker of New York and Mary Wheelwright of Boston and Alcalde, New Mexico.

From 1930 to 1933, the Society operated The Spanish Arts Shop at Sena Plaza on East Palace Avenue. It was open year-round for art sales, managed by Helen Cramp McCrossen and later by Nellie Dunton.

Leonora Curtin conceived of and subsidized Native Market as the next iteration of Spanish Market. It operated from 1934 to 1937 further east on Palace Avenue. The Market had great success as the middleman bringing artwork “From Village to Market to You” and the Fred Harvey Company’s Indian Detours regularly brought tourists to the site.

By 1936, Santa Fe’s entrepreneurs recognized that Native Market was, “one of the showplaces of Santa Fe.” From 1937 to the mid-1940s Spanish Market operated at El Parian Analco on College Street, now known as Old Santa Fe Trail, opposite from San Miguel Mission, “the oldest church.” The property was owned by a ten-member Native Market Association that was led by Leonora Curtin and Major R. Hunter Clarkson of the Indian Detour Company and the Santa Fe Chamber of Commerce. More than just an art sales shop, El Parian had enough space to provide many booths for artist demonstrations, horseshoeing, knife sharpening, and sales of farm produce and firewood. Additionally, there was a small corner theater to offer ambiance with Hispanic singing and dancing, a concession stand, a tortilla mill, and a full-service restaurant.

The Market did not operate during and after World War II until 1965, when Traditional Spanish Market was revived as an annual event on the Santa Fe Plaza along with Indian Market. During the first year it was under the portal of the First National Bank of Santa Fe. As the number of participating artists grew it moved to the portal at the Palace of the Governors.

In 1972, Spanish Market separated from Indian Market, having added many new art categories and booths continued to be added on all streets surrounding the Plaza. Traditional Spanish Market is held during the last full weekend in July with associated events during the week leading up to Market, known as Viva la Cultura.

Rigorous standards were developed to ensure that Spanish Market artists participated in regional Hispanic heritage and they were juried into art categories that represent the established traditional arts and crafts of New Mexico and southern Colorado. Today, there are nineteen art categories with approximately 200 adult artists working within them.

Artists compete for many top awards and cash prizes in their juried categories. On Friday night before the weekend market, the Society sponsors Preview which honors the awards recipients and offers collectors and visitors a sneak peak of the best artwork that will be for sale the next day.

In addition to the Spanish Market artist sales booths, there is entertainment on the Bandstand with regional Hispanic bands and dance groups, art demonstration booths, books sales booths, and food booths that complement this heritage event.

The holistic sense of the Hispanic traditional arts within the community continues through the model that was established by El Parian Analco. Youth awards are presented on the Bandstand on Saturday morning. On Sunday morning, the Cathedral Basilica of Saint Francis of Assisi offers the Spanish Market Mass where artists are invited to bring their artwork into Mass for ceremonial blessing. After Mass, a musical procession leads the group from the Cathedral through the Market to the Bandstand where a priest blesses Spanish Market. Tens of thousands converge upon the Plaza each year to participate in Traditional Spanish Market.

Spanish Market marks its 100th anniversary in 2026 as the largest and oldest juried Hispanic art show and sale of its kind.

Many collectors prefer to purchase artwork from the youth artists, especially from those youths who show promise of a long career in the arts. Youth artists also participate in the Friday night Preview event with competition for awards and prizes. Often, the youth artwork is characterized by its innocent sweetness, compelling adoration by the viewer.