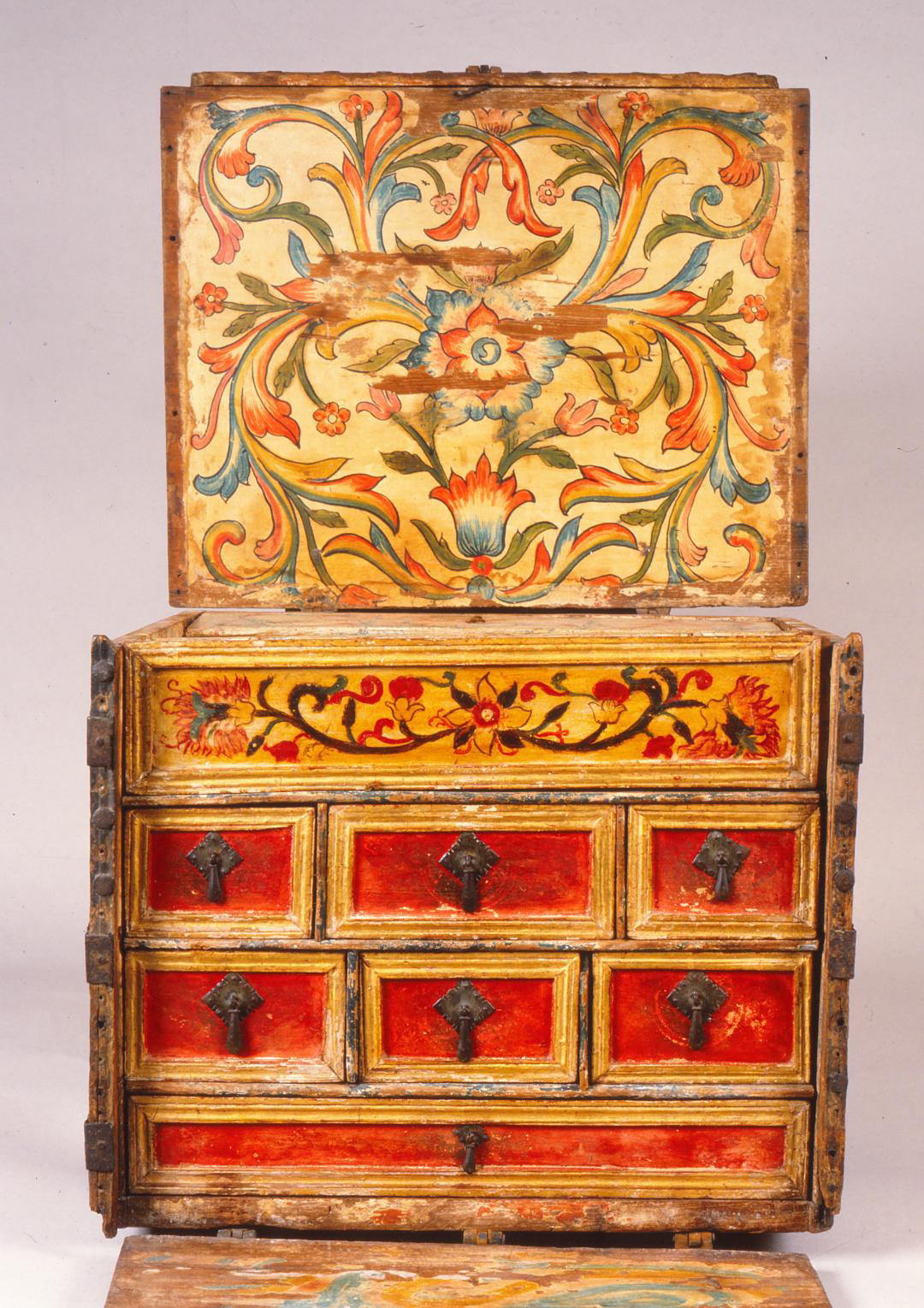 COLLECTIONS HIGHLIGHTS
By Donna Pierce, former MOSCA Curator
The Michoacán area of central Mexico had been known since before the arrival of the Spanish for the production of lacquered furniture and utensils, particularly trays and small gourd cups, or jícaras (from the Aztec word xicalli), used for drinking chocolate. During the PreHispanic era, lacquer was made from an insect known as aje that thrived in the area. During the colonial period, the craft was continued with the
encouragement of missionary friars and with influence from imported lacquerware from Asia. Painted and lacquered furniture from Michoacán was exported all over New Spain, including to New Mexico where it frequently is mentioned in documents, such as in the 1721 dowry of Luisa Gómez del Castillo (Lujan) of Santa Cruz, New Mexico.
Luisa came into her marriage with two regular chests and two writing chests, all four from Michoacán in central Mexico. Regular chests did not have interior compartments or had only a single small one. Writing chests, or escritorios (like the one in the SCAS collection seen here), had small drawers for holding writing supplies and other important items and were extremely popular all over Spain and Latin America.
Forty years later, the 1762 estate inventory of Juan Montes Vigil of Santa Fe lists six chests from Michoacan with one described as “a Michoacan writing chest with three drawers, with its table of the same; valued because of its fine painting, good appearance and gold leaf at (a whopping) 80 pesos.”
Nearly a century after Luisa’s marriage, Captain Manuel Delgado died suddenly in 1815. Delgado was born in 1739 in the town of Pachuca, north of Mexico City. After enlisting in the military, he was stationed near El Paso (Texas) and was later transferred to the Presidio of Santa Fe. At the time of the 1790 census, Delgado was second in command at the Presidio and married to Josefa García de Noriega. They had at least five children by the time Josefa died in 1811. In 1814, at the age of seventy-five (and less than a year before his death) he married (much younger) Ana María Baca and came to live at the family’s extensive ranch called El Rancho de las Golondrinas (Ranch of the Swallows), now a living history museum south of Santa Fe.
In addition to being a military captain, Delgado was a trader on the Camino Real to Chihuahua and Mexico City. At the time of his death in 1815 he owned a house and store in downtown Santa Fe and the ranch house at Golondrinas as well as other ranches and mills. Since he died intestate, a detailed and specific inventory was made of his estate. (The former Delgado Room exhibit at MOSCA was based on his inventory.) Delgado and his new wife owned six regular chests and one writing chest, all seven from Michoacán.
The seventeen imported Michoacán-made chests mentioned in these three inventories are only a few of the examples I have found that were being used in households in New Mexico throughout the colonial era. Out of the 151 chests I have seen mentioned in inventories, 49 (or almost a third) were from Michoacán. Obviously New Mexicans liked these colorful and useful furniture items.