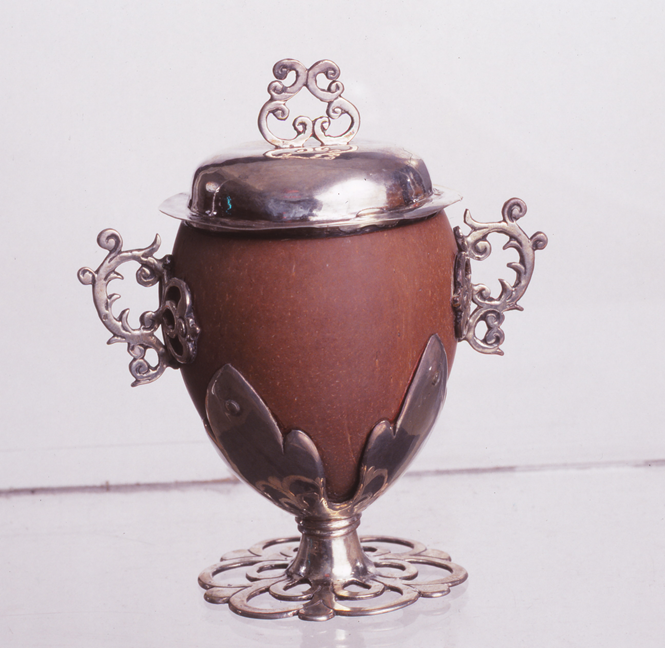 One of my favorite pieces in the SCAS collection has always been this delicate little cup carved from the hard husk of the fruit of the Mexican Pacific coconut (a subspecies of Coco nucifera L.) and mounted in silver. This type of vessel was

invented in the Americas for drinking hot chocolate and was soon exported to Spain in quantity for the same purpose.
Chocolate was a New World product – unknown in Europe before the encounter with the Americas. It had been cultivated and consumed by ancient civilizations there for centuries before the arrival of Europeans. The beans of the cacao tree were fermented, dried, roasted, ground on a heated stone (metate), and mixed with water and spices, including chile, to make a drink. In the sixteenth century, chocolate drinking spread rapidly among Spaniards (who added sugar) and then from Spain across Europe in the seventeenth century.
Spaniards had learned to drink chocolate from the Maya in the Yucatan and from the Aztecs in central Mexico. Among the Maya and Aztecs chocolate had been a drink reserved for the upper classes or for special occasions; during colonial times it spread to all classes for daily use and was consumed in tremendous quantities all over Mexico, including in New Mexico where sherds of porcelain and majolica chocolate cups are found in archaeological excavations at colonial sites.
Mentions of chocolate drinking also appear in colonial documents from New Mexico. For example, in Santa Fe in the early 1660s, the Governor Bernardo de Mendizábal and his Italian-born wife, Teresa de Aguilera de Roche, took chocolate every afternoon at 3 o’clock and her personal chocolate chest included several coconut cups, such as this one, along with at least one Chinese porcelain cup and lacquered gourds called jícaras, all used for drinking chocolate. Governors and military leaders requisitioned chocolate for their troops, Franciscan friars imported it for use in the missions, and merchants carried it in their inventories.
In the 1721 marriage dowry of Luisa Gómes del Castillo (Lujan) of Santa Cruz, New Mexico, a coconut cup “from Amula” mounted in silver is mentioned. Amula was a region in western Mexico in what is now Jalisco, just east of Zihuatanejo. Not only did Luisa have a coconut cup (like this one) for drinking chocolate, but she also had three chocolate cups of Chinese porcelain, six of majolica, and one jícara. Obviously, Luisa, like many New Mexicans, enjoyed her chocolate!