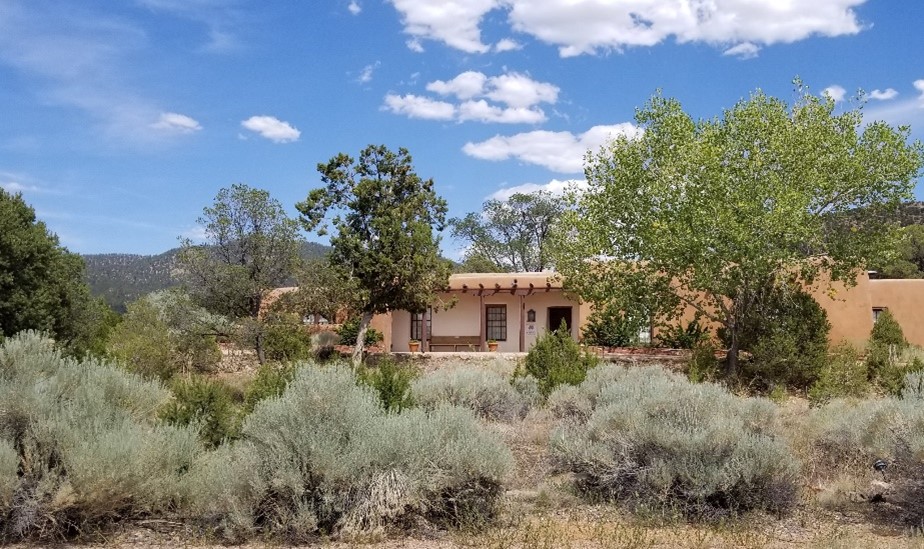 The 1930 Pueblo-Spanish Revival Director’s Residence is the only residential building open to the public that was designed by one of Santa Fe’s most prominent architects, John Gaw Meem. The structure was built with single and double-wide Penitentiary hollow-tile blocks, not adobe bricks, as a more permanent material that was hand-sculpted to appear to be made of earth. Meem, along with Isaac Hamilton Rapp and Mary Coulter, were instrumental in the definition and development of our unique Santa Fe Style architecture.

Placement of this residence within the landscape is oriented toward Sun Mountain to the east, which is appreciated immediately upon entering the front door with views through the window wall in the east portal. The building with its furnishings has been accessioned into the Society’s permanent collections with catalog number 1999.011.

The Director’s Residence was constructed by the Museum of New Mexico on the Camino Lejo campus to house the director of the Laboratory of Anthropology. Photographs taken in the 1940s show how the house was used. A breakfast area was located at the north end of the east portal and the living room was large enough to accommodate dancing with music played on the grand piano. Later the historic residence was owned by the School of American Research, now known as the School for Advanced Research, where their director lived until the late 1990s. The 1998 gift of the property to the Society was intended for the establishment of a museum with facilities for display and storage of its collections. Fulfilling one of the goals in the 1929 articles of incorporation, the Museum of Spanish Colonial Art opened to the public in 2002 with the inaugural exhibition and catalog Conexiones.

Most of the historic residential building was repurposed for display galleries with staff offices in the former maid’s quarters and public restrooms in the former garage. Very little of the structure was altered, maintaining the intimate character of room sizes and retaining beautifully crafted woodwork.